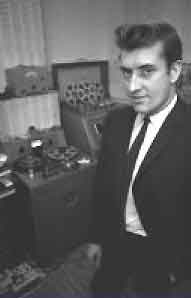 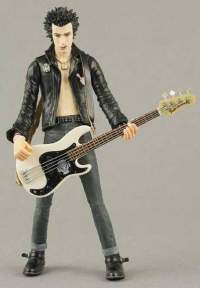 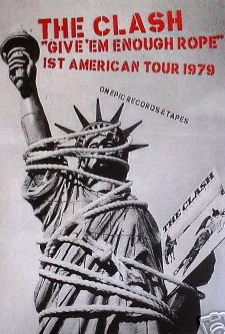 We meet at the airport and get on a plane to Vancouver. There seems to be quite a lot of us. We got baker and johnny green our backline crew, and rob and adrian who are welsh sound men.-warren “gandalf” sparks lighting engineer, and barry -scratchy’ myers, the famous d.j. Then there’s the four of us and caroline croon to handle the business.

“even aerosmith dont travel with so many people,” says epic records. .

So, 17 hours later here we are vancouver, canada. No blizzards no snow no mounties—just the customs. They go through everything, confiscating studded belts, armbands, knives, cos they cant find any drugs. “if we’d known it was gonna be like this, we’d have brought some drugs for you” we tell ‘em. But they dont smile they just kick us out, knifeless and beltless.

Anyway, on with the show. We play the agora ballroom, which shold be called the agora cowboy saloon. Q. Are we not men? Ans. No, we are nervous.

But the show goes off real good an we meet bo diddley at last. Bo is coming on the tour and the next -morning a big shiny greyhound bus draws up outside the hotel with two nashville drivers: its all aboard first stop, California.

The bus is real neat with bunks a pisshole an a tv video. Its just come off away on jennings tour. We cross the us border real easy, no, search, nothing; “then its non stop across oregon.

– about midnight we doss in a ‘ faceless motel. I wake up and as i’m searching for some breakfast ,ace penna our us tour manager tells me ”hey, did ja know sid is dead?” i grab him by the throat “what do you mean” i snarl. Then as it sinks in, i dont want no breakfast. Our first morning in america.

In california the sun is shining weakly .the other people walk about the streets weakly.in fact everything here is done weakly except for when the cops get hold of you. We play the Berkeley Community Theatre on the college campus our first mistake, meaning, it aint our scene but we play and they dig it, tapping their biology books in time to the tunes.

Bill graham, famous hippie promoter is promoting the show and making all the money, but he leaves town just before we arrive. Next night however we agree to play a benefit for this youth organization who are trying to-open up the s.f.scene by promoting cost price rock shows. The show is really great ,the hall is really great, the audience is really great but we gotta leave straight after the set to drive the 400 miles to los angeles. 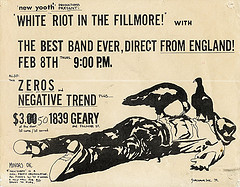 The drive takes all night and we test out the bunks which are like comfy shelves. We hit l.a. In the-morning an we gotta play the santa monica centre the same night. Me an mick try to get a look at hollywood’ but we collapse instead. Later mick tells me his hotel bed just kept moving all the time.just like mine. And we work out it is because we were on the bus all night.

The santa monica civic centre turns out to be a concrete barn. I only remember the really good shows or the really bad shows. So this one must have been just o.k. Cos my memory is blank.

Right after the set, they drag in some epic people. Quite a lot of em, line em up and try to get us to pose with them. I’m fed up with this so i’look at topper and he reads mythoughts ’lets fuck off outof it” he says almost simultaneously as mick and paul say it. So we do. When the epic people leave they do not speak and they do not look the air is thick as they file past.

Again straight after the show we gotta hit the road. A load of fans give us a great send off so we are all in a good mood as we head for oklahoma city. 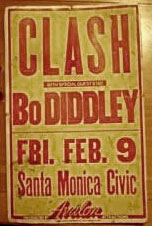 On the bus Bo sits-up front’ slugging “rock n rye” and pouring. Out anecdotes from his 23 years on the road. The bus has three video tapes — star wars (groan) king creole(hooray) an blood for , dracula. Topper sits with his feet up showing off his new spurs watching these or-playing tricks on Bo with -whom he has hit it off real great. Mick and paul sit up the back plugged into-some jumping rockabilly, watching the endless truck tops slide by.

Drivling to oklahoma city is like driving from london to glasgow 10 times. So i get my head down and when i wake up we are in texas, i know this because johnny green and baker are wearing the biggest -cowboy hats i ever seen.

Texas is one of the best places although i cant say why. We are trying to reach cleveland ohio hoping to catcha plane in oklahoma city. Theres plenty of snow fog and ice at the airport but no planes. The bus has gone to nashville for repairs so we sit and wait. 24 hours later we finally get to cleveland, flying the roundabout route. 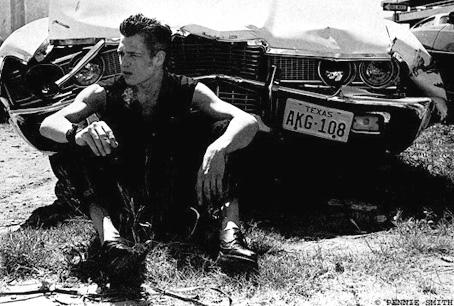 This guy called larry mcintyre lost both his legs in vietnam and when he went for a swim one day in the pool near his flat all the other residents banned him from the pool, on the grounds that it was too ‘ disgusting… So we agree to play a show for him, helping his legal costs but we dont get to meet him, i think because, having forgot his name, I reffered to him over the PA as the guy with no legs.

Incidently, to give you some idea of the size of the country, we meet some people who had travelled 800 miles to see the show.

Next stop is washington d.c.the bus has caught up with us so its all aboard. On this drive bo gives up his bunk to his guitar and he sleeps. Sitting up. So does Mick because nothing on earth will tempt him to get back in one of the bunks.

Meanwhile outside its 32 below zero and as we are filling up some place the brakes freeze up and are locked solid. So we have to sit and wait a few hours for them to thaw.

Those of you who stayed awake in school will know this is the us capital. Strangely enough most of the population is black, which makes all the white politicians a little nervous. We was gonna pay a call on jimmy carter but he was down in mexico,having a massage. So we played d.c. And headed out for boston. Even though this was only last week my memory has gone .again so lets say it was okay and get on with it, which means new york! New York! (so good they named it twice etc.). 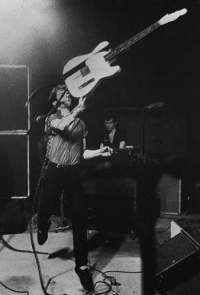 New york is definately an o.k. Town. All the streets are straight and its laid out like a chess board.some parts are dead flash like manhattan and some parts are burnt out slums like the south bronx.

We was playing the Palladium.a bit like the Rainbow.this was the third gig in three days.and with all the travelling we was pretty knackered. During the sound check i over heard a yank talking to his mate “wow these guys have had it/they can hardly stand up, never mind play!”

Then bo told me the worst audiences in the US were detroit and nyc. “if you can play new york you can play anywhere” .

By gig time the place was packedand all the top liggers in town were there.we were plenty nervous halfway through the show i checked the audience and became convinced that we were going down like a ton of bricks. But like they say its a tough town and by the end of the day we managed to whip it out and give ‘em some of our best.

We stuck around for a day or so to see the sights like studio 54 which is okay but nothing to write home about.to get in without paying you have to turn up with andy warhol.

One more show to go, in toronto. We fly there to do the gig which is in a cinema. The dressing room actually is a toilet and the pa. Sounds as if its filled with hamsters on coke. Even though it sounds rough we really enjoy it and so do they, storming the stage at the end english style. One of the funniest things i ever saw was these two bouncers trying to hold the whole audience back. The two of them! After the first number they were swamped so they gave up and went ‘ home.

And the next day so did we, to break, crack, storm or blitz america you have to work as hard as elvis costello, shake hands and smile like the boomtown rats, and sound like dire straights. Of the three. We could make the first but not the rest so we are going to go back to play the us agal n but we must also play britain, japan, europe, australia, and its fair shares all round. Hey! I hear theyre really rocking in russia. 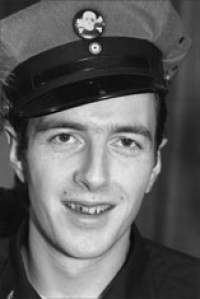 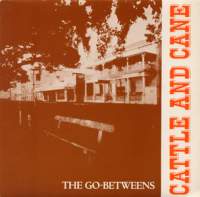 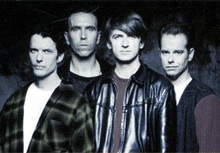 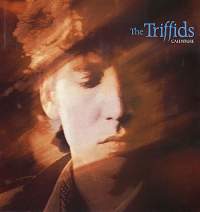 Suntrapper
In The Pines
Kathy Knows
25 To 5
Only One Life
Do You Want Me Near You?
A Trick Of The Light (bonus track)
Once A Day
She’s Sure The Girl I Love (bonus track)
Jerdacuttup Man (bonus track)
Just Might Fade Away
Better Off This Way
Keep Your Eyes On The Hole
Blinder By The Hour (bonus track)
Wish To See No More (bonus track)
One Soul Less On Your Fiery List
Born Sandy Devotional
Love And Affection

Og hvad betyder Calenture? Ifølge pladens cover dette: “Tropical fever or delirium suffered by sailors after long periods away from land, who imagine the seas to be green fields and desire to leap into them.” En beskrivelse der også fint illustrerer The Triffids’ længselsfulde univers… 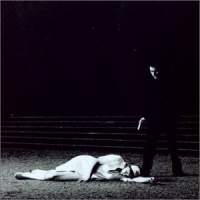 Listen to Miss Kittin and The Hacker’s new direction
Driving a car or three on three, giving you a piece of life and energy somewhere out in the universe, for a novel
We try to analyze feelings, thinking about you, friends, mountains, and party times
I wish you could see us, how we are, how we love and hate

Listen to Miss Kittin and The Hacker, our mind is real, on a cloud, when someone’s playing us in a club at night.
And we receive smiling on the dance floor, trying to forget everything
We don’t know you, but you are a part of ourselves, and we can look into your eyes, wherever you are

Listen to Miss Kittin and The Hacker, we take planes, from hotels every weekend, we drive on the highway to other places, looking at the landscape running behind the window, we are all alone
Listen to something on the stereo

We would like to see skyline and city lights of New York, or Tokyo and then come back to the green fields we know, and do nothing
And sleep
And do that again and again

Listen to Miss Kittin and The Hacker because this is what our music is about, you and us
You, and us.

Listen to Miss Kittin and The Hacker’s new direction
Driving a car or three on three, giving you a piece of life and energy somewhere out in the universe, for a novel
We try to analyze feelings, thinking about you, friends, mountains, and party times
I wish you could see us, how we are, what we love and hate

We would like to see skyline and city lights of New York, or Tokyo and then come back to the great fields we know, and do nothing
And sleep
And do that again and again 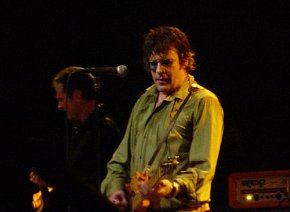 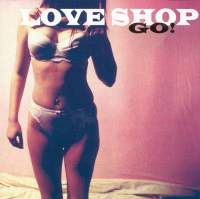 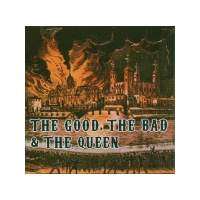