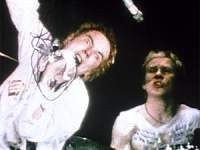 Sex Pistols – Marquee
“HURRY UP, they’re having an orgy on stage,” said the bloke on the door as he tore the tickets up.
I waded to the front and straightway sighted a chair arcing gracefully through the air, skidding across the stage and thudding contentedly into the PA system, to the obvious nonchalance of the bass drums and guitar. Well I didn’t think they sounded that bad on first earful – then I saw it was the singer who’d done the throwing.
He was stalking round the front rows, apparently scuffing over the litter on the floor between baring his teeth at the audience and stopping to chat to members of the group’s retinue. He’s called Johnny Rotten and the moniker fits.
Sex Pistols? Seems I’d missed the cavortings with two scantily clad (plastic thigh boots and bodices) pieces dancing up front. In fact, I only caught the last few numbers; enough, as it happens, to get the idea. Which is… a quartet of spiky teenage misfits from the wrong end of Various London roads, playing 60’s styled white punk rock as unself-consciously as it’s possible to play these days i.e. self-consciously.
Punks? Springsteen Bruce and the rest of ‘ em would get shredded if they went up against these boys. They’ve played less than a dozen gigs as yet, have a small but fanatic following, and don’t get asked back. Next month they play the Institute of Contemporary Arts if that’s a clue.
I’m told the Pistols repertoire include lesser known Dave Berry and Small Faces numbers (check out early Kinks’ B sides leads) besides an Iggy and the Stooges item and several self-penned numbers like the moronic “I’m pretty vacant’, a meandering power-chord job that produced the chair-throwing incident.
No-one asked for an encore but they did one anyway: “We’re going to play ”Substitute'”.
“You can’t play,” heckled an irate French punter.
“So what?” countered the bassman, jutting his chin in the direction of the bewildered Frog.
That’s how it is with the Pistols – a musical experience with the emphasis on Experience.
“Actually we’re not into music,” one of the Pistols confided afterwards.
Wot then?
“We’re into chaos.”
Neil Spencer – NME Feb 21 1976